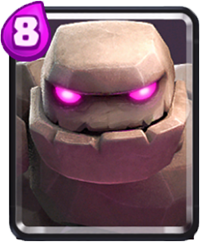 A huge, durable stone creature that slowly moving to its target and don’t pay any attention to the enemies that are trying to stop him! Yes,  that words were about Golem – one of the most powerful epic card in Clash Royale to date that unlocks and becomes available after promotion to Arena 6 Builder’s Workshop. The devs endowed this character with a huge stock of hitpoints (3,200 units / 1st level) and not bad damage power (78 units / 1st level). Moreover, in the moment of his destruction Golem ruptures and divides into two small Golemites, which continue an attack!


His explosion causes an area damage (195 units / 1 st level). In a word this is machine that is hard to stop! In this post I’ll share my best Golem deck (with no legendary cards in it) and my experience how to use it in a proper way.

So, as I’ve already written, with the skillful and competent use of Golem it’s possible to defeat players of a higher level in Clash Royale!  And don’t forget that correctly formed battle deck – it is not a victory yet! Not less important to use it in proper way!

I’d like to start from the picture of my best Golem deck in Clash Royale! Here it is: 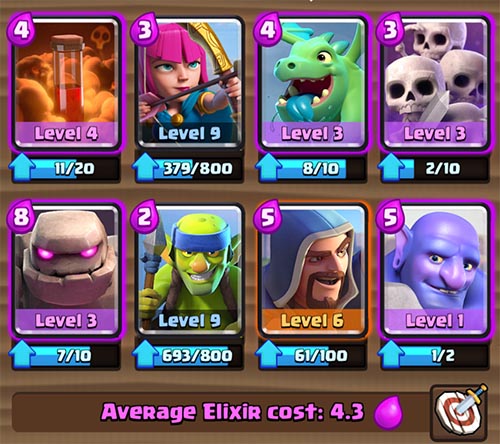 As you can see there is no legendary cards in the deck!

And now I’ll try to describe in detail why exactly these cards … Based on my experience I can with confident say that the most often cards that players put on arena against Golem are Skeleton Army and Minion Horde (this is approximately in 60% of cases) . Less often, they try to stop “stone creature” with the help of Witch, Wizard, Minions and Barbarians. The other cards uses less.


Thus, we need to take in our deck such cards, the characters of which can attack ground targets as well as flying ones. I stopped my choice on the cards you’ve seen higher, and now I want to tell you why:

Look at these cards once again:

And form such deck for yourself!

And finally a video of a several battles where I’ve been using such deck:

Have I convinced you?
Good luck in Clash Royale! 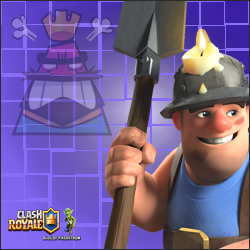 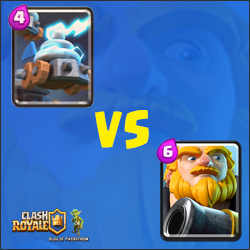